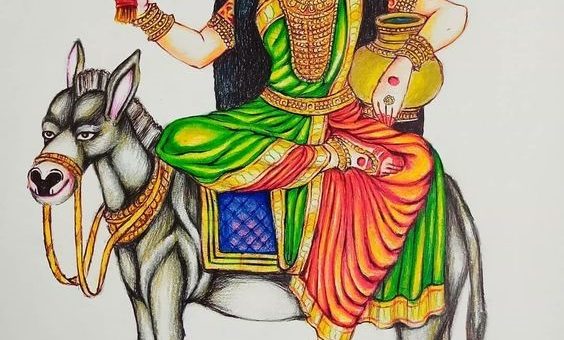 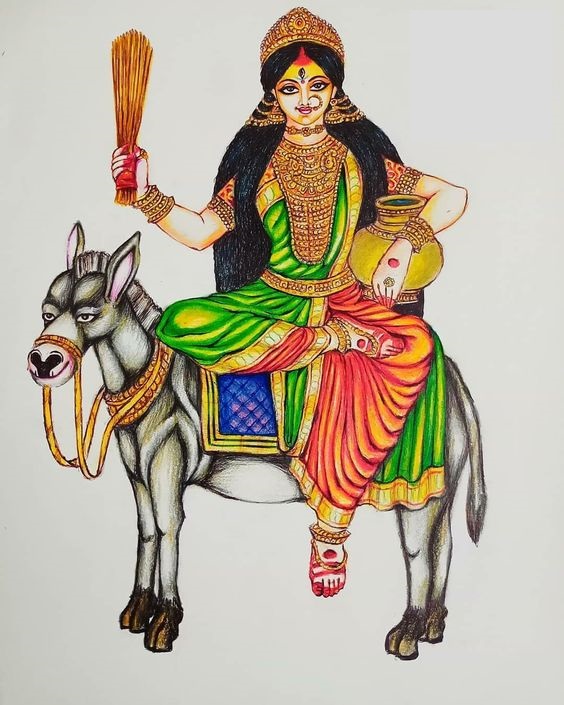 We have included the vidhAnaM for goddess shitalA in this issue. shItalOpAkhyAnaM is said to be part of skandapurANA and describes how She revealed Herself on earth and her mAhAtmyA. The literal meaning of shItalA is one who cools. However, the true contextual meaning is one who brings relief at the time of distress. That relief is represented by cooling. The specific distress that is indicated here are those that are triggered by pandemic and endemic diseases, and heat related ailments.

Once upon a time, when shivA was performing intense meditation, due to the energy generated from his body, sweat drops fell on the ground. These sweat drops joined together to form an asurA called jvarAsurA (since it was an outcome of heat perspiration). jvasAsurA started to spread heat related ailments on earth and everyone who came into contact with those affected by jvarAsurA also got affected. It primarily affected the children of earth and death bells were heard everywhere. The crying sounds of the mothers were echoing around. This started spreading to the dEvalOkA too. ParvatI as kAtyAyani was playing with her friends at Her abode. Even kAtyAyanI’s friends got impacted by jvarAsurA. Since shivA was meditating, all the dEvAs and the mothers in planet earth prayed to kAtyAyani to find a solution to control this problem. Upon hearing the cries and prayers of Her bhaktAs, out of her compassion came out a shaktI who had a golden kalasha at Her hand with purified water with healing powers of neem leaves. She saw how the entire Universe was impacted by this pandemic and immediately took a broomstick and washed all the germs and collected them on a winnowing fan (muram in tamil). This stopped the spreading of the pandemic. She then used the healing water and cleansed the whole Universe. This gave immediate relief to everyone in all the three worlds. This cooling effect after the distress resulted in everyone calling her as Ma ShitAlA.

Seeing this jvarAsurA got wild and came to fight with Her. She then took a kalashA full of lentils and threw it on jvarAsurA. It immediately attacked him and he was affected by the same disease he was spreading around. He realized his mistake and prayed to the Goddess to forgive him and take him as the vehicle. As karuNamayI, She agreed to his request and granted certain boons to him. jvarAsurA became a donkey and became the vAhanA. He would not bring any harm to those who pray to shItalA and observer shItala vratA annually. Interestingly, inflicting one with the same disease appears to control it – a vaccination concept – this was also indicated in this story. She is supposed to be assisted by Goddess called raktAvaTI (one who cures blood related diseases), catuHShaSTi yOgiNI, and OlAdEvI (Goddess to treat cholera and diseases spread by bacteria and viruses).

She is prayed as shItalA is the North and mahAmArI in the South of vindhyAs. There are numerous pilgrimage sites and tIrthAs related to mA shItalA. She is worshipped differently in different parts of the country but the majority in the North follows a standard vrat. On the seventh day of kRuShNa pakSha during the month of phAlguNA (seven days after hOli), shItalA vrat is observed. It is called shItalA sataN or basODA. During this day, the entire house is cleaned, fresh neem leaves are kept at doorways, neem water sprinkled everywhere in the house. shODasha upacAra pUjA is performed to mA shItalA and sweet jaggery or kichadi along with buttermilk is offered as naivEdhyA. The next day is celebrated as shItalAShTamI. On this day, no cooking is done at home. The prasAd that was offered the previous day is consumed on the asHtamI day. shItalA pujA and vrat kathA are read. If this is performed every year, the bhaktAs would not be inflicted by any diseases.

We hope this issue would be valuable addition to your spiritual literature collections.