We have been looking at VR first aMsaM. We are almost to the end part of the 1st aMsaM now. We are now look at the 3 different japakAla bhAvanAs.

We might all be wondering why are these important and how is he simply stating these. What is the pramanA?

The pramAnA for these avastApancakaM, shUnyaShatkaM and sapta viShuvaMs are in yOgiNI hRudayaM – pUja sankEtAm. If you all remember, I had talked about the importance of yOgiNI hRudayaM and the different chapters within this tantric granthA. You have cakra sankEtA, mantra sankEtA, and pUjA sankEtA. In fact, the motivation to write VR for bhAskararAyA would have come from Yogini hRudayaM only. VR is his first tantric granthA. After writing, he would have still felt incomplete and wanted to give a full commentary on the entire nityAshODashikArNavA and yOgiNI hRudayA. Remember, there was already a commentary for that called dIpikA by amRutanandanAthA. But still bhAskarA felt compelled to give a commentary and that is sEtubandA – a bridge that takes you to the unknown 🙂

Now, let us look into what YH says about these bhAvanAs we were looking into.

Here, it says shUnyaShaTkaM first and then says avasthApa~jcakaM. However, bhAskararAyA reversed the order and explained avasthA pajcakaM first and then the ShUnya ShaTkaM. He does not provide any reason why he changed that order but I have my own theory that I will explain a bit later.

Here is where the confusion set in and bhAskararAyA was basically addressing the confusion in his commentary. When the YH claims to leave 3, what do they mean? Leave 3 from the top or Leave three from the bottom or three in the middle etc. He calculates the different sthAnAs for the shUnyAs based on these various assumptions and finally says all those assumptions are wrong and comes up with the 5 shUnya sthAnAs and then the mahAShuNyA at unmani.

In fact, AmRutAnandanAthA in his dIpikA commentary for Yogini hRudayaM has clearly mentioned the correct sthAnAs and bhAskarA also agrees with those only. However, in his usual analytical manner he applies various possible meanings for the YH shlOkA and finally says those other meanings cannot be right.

From a literary and research perspective, his arguments, claims and disclaims can all be enjoyed. But for practical purposes, what we need to know is these 6 shUnyAs are in the following sthAnAs –

Now, even though he has established this well, I had problems in visualizing this even after 3 or 4 reading of VR. My problem was, when you have bindu, rOdhini, etc as states, distinct and vivid and can be experienced. In fact, the previous shlOkAs clearly state the form, color, etc for these states, how can you claim that to be a shUnyA. Remember, anything above the bindu state, there is absolutely no literature. You are at the total mercy of the GurumanDalam only for guidance. So I struggled for several years on how can a state suddenly become a shUnyA? It is not possible. At the same time, there are two great mahAns – amRutAnandanAdA from kashmIRa and bhAskararAyA from dakShiNA dESa both claiming the same thing. So this has to be true and they must have experienced this and what was I missing. It was not an easy thing to get hold of.

Again with the Grace of the GurumaNDalam, it hit me that this whole thing is japakAlA bhAvaNA. So, it is such a simple statement and I totally got confused about it. It simply says that you visualize only and does not claim that it does not exist. It simply states to visualize the shUnyA at that state. YH does not say the state doesn’t exist. Once this understanding settled in, it became must easier to visualize.

I have given my visualization pattern in the handout. It may not make sense to several of you now. But whenever it does in the future, atleast you will know what it is and how to do it.

Now, I still had the lingering question on why did bhAskarA change the order from YH. YH asked us to visualize the shUnya ShatkaM first and then the avasthA pancakam. But why did bhAskarA change it. I was then contemplating on what was wrong with YH’s order in the first place? Again it is only because of the Grace of GurumanDalam the answers were gained. By the way, when I say by the grace of the GurumaNDalam I got the answer, it also means that to even think of that question itself you need the Grace. Without the seed called question how can an answer sprout?

We all know that everything that has been manifested is from that one prakAsha bindu. From that bindu, this whole manifestations happened in various dimensions. From the space dimension, the first thing that happened is the space. The space is – manDalaM, AnDaM, ambalaM, vEli, vyOmA, or shUNyaM. However you want to call it, it is this mahAvyOmaM. The great space – outer or inner is a topic for a different day. But a great spAce. Everything else then came out from this space only. Even if you consider the astronomy, it is the space that is manifesting everything that exist. Everything starts from the dark space and merges within that space only. So, YH was right in its order by stating the shUnyaMs first and then the manifestation. Then why did bhAskararAyA change it? BhAskarA’s purpose was to explain. This whole VR is to explain the various dimensions of manifestation and he feeds it to us like little kids. He understands that it is difficult for beginners to contemplate that everything manifested from the space. Instead it is easy to contemplate that there is space in between. So, for our own benefit, due to his akhaNDa karuNA, he reveresed the order to explain it for us.

Perfect answer and that cleared my doubt. But then, I got another question. where is then the relationship? avastAs and shUnyAs? The shlOkAs didn’t even talk about any relationship between them?

It is for our own contemplation. Just the order was enough. I have always explained to you all that there is this split second space/time between the avastAs and if you can catch hold of that, then you experience the Atman. I went into detail in the last session about how Atman is the Least common denominator and by eliminating the various faculties that act at various avasthAs, you end up being with Atman at the turiAtItA state. The space between those avastAs are the shUnyAs.

The thread that we talked about in the last session in the mAlA, is basically the shUnyA here. How can shUnyA be the Atman? It cannot be. Atman is not the shUnyA. Atman is the foundation on which the mahAvyOma exists. But before the Atman gets realized, the shUnyA is experienced.

bhauddhA mathaM stops with this shUnyA only and doesn’t extend itself to the mahAbindu. That doesn’t mean that the experience is wrong. The experience at this mahAvyOmA or the mahAshUnyA state itself is a great anubhavaM. But you cannot claim that to be an aTmAnubhUtI.

mahAperiyavA has talked about this in one of his lectures. I listened to this several several years ago. So don’t know where this is in Deivathin KuraL. May be Mahesh or others can give pointers to that. In that session, mahAperiava would be talking about this state of mahAbindu using vibhUti as the analogy. I cannot explain concepts like mahAperiava. But I will attempt to give a gist of it. In the dvaita mode, we see the entire manifestation as jagat. We know that everything that we know of as tangible can be consumed by agni. So if you assume that we feed the entire jagat into agni, what would be the result? Ash- sAmbal. It would be black in color. If you then feed this ash also again in agni, what would remain? Would it vanish? No! If you keep on feeding the remainder into the agni constantly, you still will get a residue – a white color vibhUti. You can use this analogy to describe the vibhUti mahimA by relating that to the brahmaN. Here, I am going to use this analogy to talk about the mahAbindu state. Even though everything appears to be a manifestation of the mahAvyOmA or the mahAshUnyA, it also has the AdhAraM on the brahman. It is She, parAbhaTTArikA who is nirAdhArA – not the shUnyA. But you would 100% have to go through the ShUnyA experience to reach the mahAbindu. It cannot be escaped. Those who have even a little bit of success with meditation would vouch for this shUnyA. This space within is just vast. Huge, never ending. Those who have travelled there would know that it is NOT hallucination, it is not visualization, it is not imagination, it is not a bhAvana – it is real. Just as real as you see the physical space.

With that note, we will jump into VR and see what Bhaskara has described.

While bhAskarA took 5 shlOkAs to talk about the avastApancaka bhAvanA, he compressed everything into 1.5 shlOkAs for the ShatshUnya bhAvanA. So in this session we will only look into 1.5 shlOkAs.

After establishing the avasthApajcakaM, let us understand the shUNYa ShaTkaM.

mayUra picCha – peacock feather
agra gataM – there are several meanings for agra – like first, top, tip, point etc. But I think in this context, the best meaning will be prominent
candrAkAraM – like a moon.
shUnyaM – is shUnyaM. 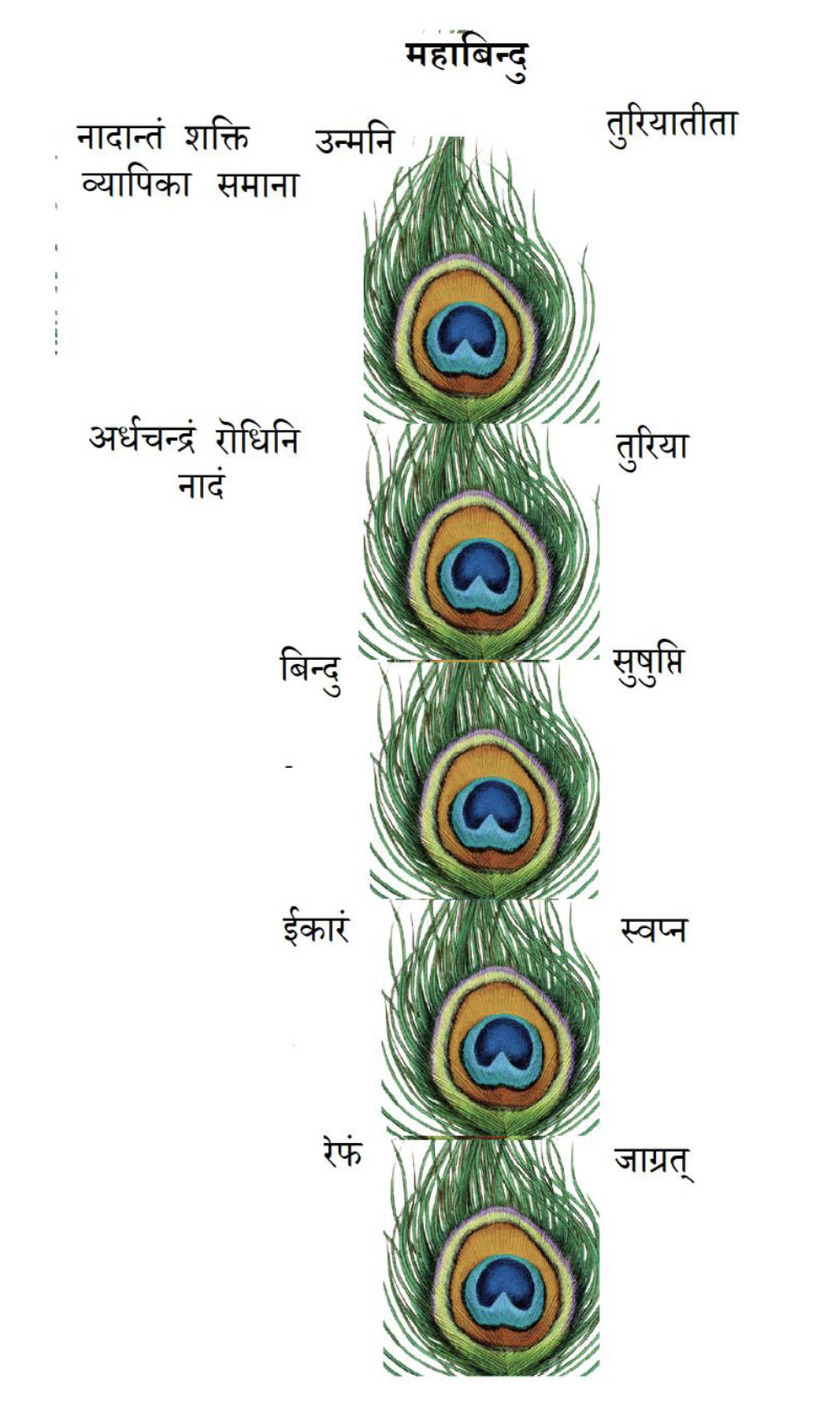 Why peacock feather? If you look the grand beauty of the peacock feather when it is dancing, you see all the various colors and the vastness of its spread and the vibrancy of its manifestation etc. But you really observe, the beauty of the feather is not in the strings but the eye. That is the true beauty. In addition to that, if you keenly observe, it the eye that the core which holds everything intact.

If you see the arrangement of the feather, you can see an eye and the strings coming out and getting manifested and then again another eye on the top of that and again some manifestation etc. This arrangement is the analogy that is used.

The body of those who meditate of the fine shUnyAs by imagining them like the peacock feather painting, shines like the great space – prakAsha bindu.

On a different interpretation, leaving the first three and the last three and considering the middle 6 from ardhacandra, the three shUnyAs would be in ardhacandran, nAdaM, and shakti and the mahAshUnyaM in vyApikA.

However, YH clearly states shUnya ShatkaM. So how can there be only three shUnyAs?

Similarly, When they YH says agnyAdi, it means it is included and starting from.

It also talks about the end.

Since there are 12 sthanas and we have to get 6 out of these, we simply can look at the alternate sthanas to get it.

ekaika – means one by one

ekaikAntara here means every other one.

If the first shUnyA is considered at rEphA, then the separation (vyavadhAnaM) will be at hakAra, ardhacandra, nAda, shakti, and samAnA.

This is what is three and three.

When YH said three, three, it did not mean three. It meant 6. It meant addition.

Why did this kind of confusion happen? He answers that this is paramarahasyaM. Hence as usual tantra shAstra throws in some confusion so that these can only be revealed through gurumukhaM and not by reading some literature.