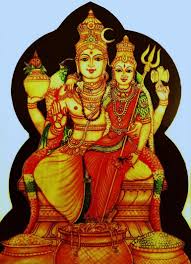 In this issue, we are bringing out the vidhAnam of shrI svarNakarShaNa bhairavA. This devata holds a special place in shrividhyA. He resides in shripuram under the kalpataru ever radiating His golden hue. A few tantras glorify him as the mahAbhairava who presides over all the 64 bhairava. While there are several prayOgAs attached to this devatA, for those looking for AtmAnubhavam, He cuts off the bondages and grants the jnAnam. His 58-letter mantra is considered to be shighra phalada when properly followed under Guru’s guidance. He is one of the chitamaNi traya mUrtis and is part of both shakti Rashmi mAlA and shiva Rashmi mAlA. He is considered as the combined form of shiva, vishnnu, and brahma. His worship is very secretive, and His idols can be seen in Chidambaram, padappai, and some shrividhyA related temples.

The mantra japA, AvaraNa pUjA, sahasranAma, kavacam, two different stotrams are
included in this issue. Most of these are available only in hand written manuscripts with several gaps and mistakes. Care has been taken to compare multiple manuscripts and produce the correct version as much as possible.