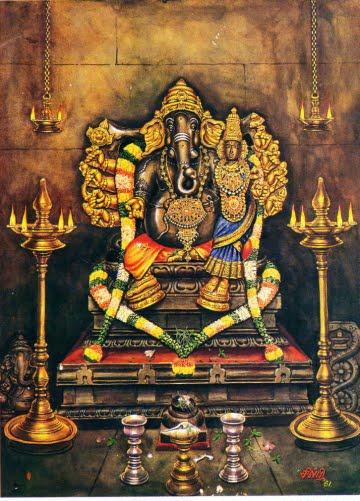 The auspicious day of Vinayaka Chaturthi falls this month and hence the major theme for this magazine has been devoted to Ganesha related vedic, puranic, and tantric information. GaNapathi atharvasheersha is a popular Upanishad and is commonly chanted by many. However, there are several vEdic Upanishads and suktas that deal with gaNEshA that are true gems but are not widely taught or known. This magazine is an attempt to bring out some of those gems to the upAsaka community.
The rig vEdiyA gaNapati suktA believed to be one of the first hymns on gaNEshA has been included along with the swara notations so that those who know to chant mantras as per rig vEda swaras can be benefited.

VallabhOpanishad has 4 chapters and the first two chapters are devoted to the explanation of the form of the vallabha gaNapati. The essence of this explanation is covered in the Ganpathi – Meditation guide by Shri AtmAnandanAthA (included in this issue). The third chapter dwells completely on vallabhEsha mantrAs and some of the merits of combining the vallabhEsha mantras with the other tantric dieties. Thus, this chapter is primarily a treatise with manthra uddhAra sholkas. We are pleased to present this chapter with its uddhAra sholkAs and most importantly, the decoded manthras as well. As usual, we strongly recommend that the Guru or the seniors within the Guru maNdalA should be consulted prior to starting the japas of any of these manthras. I would like to take this opportunity to share my experience when I was performing my gaNapati mantra japA. My Guru graced me with the GaNapati and BAlA mantras on the same day and I was chanting the prescribed japa krama for 100 days. I was chanting mahA gaNapati during the day and bAlA in the evening. After about 2 weeks, while chanting the dhyAna shlokA of mahA gaNapati, I was unable to bring His form into my thoughts and a new form with a mix of bAlA and gaNapati would be revealed. In spite of my concentrated focus, this form would never change and I completed the prescribed 100 day japa krama only with this form in my dhyAnA. On the 100th day, since I knew I would be completing this japa krama, I wanted to ensure that the form that graced me does not go away and hence did a pencil sketch of the form the way it appeared to me along with its energy yantra form. I was very new to this field and had absolutely no idea about the various forms of gaNEshA at that time. Several years later, when my Guru asked me to read vallabhOpaniShad, I was shocked to see the form of bAlA gaNapati mentioned and was overwhelmed with the grace of Guru and the karuNa of vallabhEshA and bAlAmbA. I have included this pencil sketch in this issue.

There are about 50 different nyAsAs devoted to gaNapati in various tantric texts and many many more that might be there but have not been revealed yet. Of these, the gaNesha nyAsA (part of laghu shODA nyAsa), the extremely potent ganEsha ShadadvA nyAsA, gaNEsha mUla mantra nyAsA, dasha vighna nyAsA, and AvarNa dEvatA nyAsAs have been included in this issue. As part of the gaNesha AvAhanA, gaNapati mudrAs and gaNapati tAlam lyrics are included in this issue. We tried to embed the audio of gaNapati tAlam into this document but the inclusion of that increased the size of the file dramatically. Hence, we decided against including the audio. UpAsakAs can simply perform a web search on gaNapati tAlam and there are several good audios available that can be downloaded or listened to.

The gaNapati AvaraNa krama is included in this issue for the enjoyment of upAsakAs. The speciality of this is that the mUla mantras for each of the AvarNa dEvatAs have been included. Thanks to shrI AtmAnandanAthA for sharing this crown jewel. The gaNEshAstakam as provided in nityOtsavA at the end of gaNapati kramA is included in this magazine.

vAnchAkalpalatA kramaH for mahAgaNapati is a popular scheme that has been practiced in various guru maNdalams. Chanting all the four chapters of this krama would take upto 45 mins to an hour from start to finish. Interestingly, in vanadurgOpaniShad, a simpler form of this vAnchAkalpalatA kramaH is prescribed. Shri RAdhA KrishNa sAstrigal, in his vignEshwara stuthi manjari has decoded this krama elegantly. This issue carries this laghu vAchAkalpalatA kramA that is simple enough to get into a daily routine.

As mentioned earlier, Shri AtmAnandanAthA has shared his article on the meditation guide for mahA gaNapati in this issue. This will be helpful for the upAsakAs in understanding the conceptual form of gaNapati and to bring this energy into the focus while performing the dhyAnA and japA.
A few pearl Tamil poems on GaNapati penned by Shri Elandai Ramasami are included. The poem on GaNapati containing the word “Anai” is a delight to read and listen to. Thanks to him for sharing these wonderful poems in this issue.

In the June issue of PurNAnandalahari, an article on Valli malai swamigal and ChidAnandanAthA was included and we received several positive feedbacks from the upAsakA community about that article. Several upAsakAs also asked us to share more information about Vallimalai swamigal and his Guru. ShrI SadurAm swamigal, the disciple of ShrI Vallimalai Swamigal has written several articles about His Guru and these were published in books and soveniers. We have decided to include some of the interesting articles about these great sages in pUNanandalahari. Scanned images of the actual articles will be included starting this issue. In this issue, an article penned by Shri sAdurAm swAmigal about ShrI vallimalai swAmigal and Shri ShEshAdri swAmigal is included for the reader’s enjoyment.

Lastly, I would like to give a little background about the drawing included in the third page of this magazine. Several years ago, prior to my association to Shri VidyA, I had a thought one day to imagine how ShivA and pArvatI would have taken care of gaNeshA as a baby. We have seen SomAskanda mUrti but seeing gaNeshA as a baby along with the parents Is a rarity. Hence, I spread my imagination wild and drew a sketch of Shiva throwing the moon from his head to the sky and using a snake from his garland as the cradle rope and the five heads of the snake forming the base of the cradle and the Adi Dampati’s rocking the cradle with GaNesha sitting in it. Nandi witnesses this beauty in the KailAsh mountain backdrop. When I did the sketch of this imagination, it came out so beautifully that I immediately did a wood burning art with it. This unique art is popular in the Western coutries that uses a hot iron rod with various styles of nibs to burn a wodden bark to give out the various shades of colors. After getting initiated into Shri VidyA, I was casually showing some of my arts and paintings to my Gurupatni and when I showed this art, she immediately said that it is the pictorial representation of the lalitA sahasranAma “KAmEshvara mukhAlloka kalpita shrI gaNeshvara”. Only then, I realized that it indeed is kAmeshwara and kAmeshwari. The ambAl in this drawing sports a sugar cane bow and casually glances as kAmeshwara with a slight shyness on her face.

I would like to take this opportunity to express my gratitude to those who spent their time in performing the tedious work of proof reading this magazine. It is because of them, several spell errors and procedural errors are eliminated in this issue and this e-magazine has come out to be a worthwhile edition that can be used by the UpAsakA community.
Lalithai vEdam sarvam.