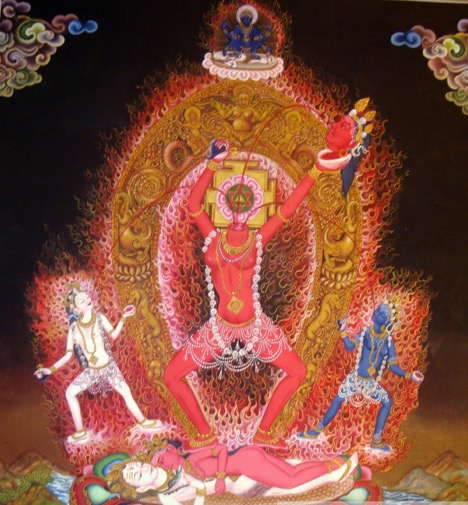 While several people get a shock on their first glimpse of the svarUpa of ChinnamastA, she is in fact one of the most kArunyA and shIghra phaladA. Those who have realized and experienced the true nature of this dEvatA would understand that she is nothing but the Sukshma-tama representation (kundaliNI) of the mahAvidyA. The iDA, piNgalA, and sushumNA representation of the yOgic path resulting in the enjoyment of the nectar called mOkshA by standing on top of the mithuna dampatI cannot be any more clearer. This dEvatA is a simple pictorial representation of numerous yOgic tantrAs. There have been several siddha purushAs even in the recent generations who have had pratyakSha siddhi of this dEvatA. They have vouched for the siddhi phala potential of the OM hrIM OM samputIkaranA of the mUla mantrA.

Like TarA, ChinnamastA is another mahAvidyA that is adopted into the Buddhist tantric practices as VajravairOchani. While tArA svarUpA in Buddhist doctrines are different, ChinnamastA svarUpA is very similar to that of the shaktA scriptures.

These mantras cannot be taken lightly and readers are strongly adviced to check with their Guru’s prior to start practicing any mantra or procedure as detailed in this issue.