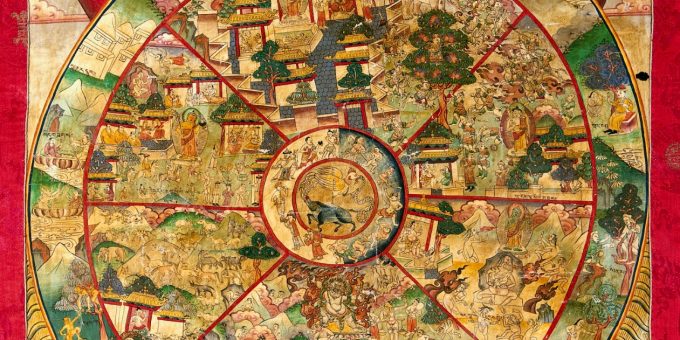 We are continuing the CaturviMshati mUrthi vidhAnams in this issue. Each of the 24 Murti is supposed to be sporting a permutation and combination for the 4 weapons viz padmA (lotus), Shank, Chakra, and Gadha. In this issue, we will cover the mantra japa and AvaraNa pUjA paddhathi of purushOttama mUrti, Lord puruShOttama.

We started the mantra and AvaraNa pUjA kramA of the dashadikpAlakAs. In this issue we have covered the several mantra japAs of yamA and His AvaraNa puja kramA. 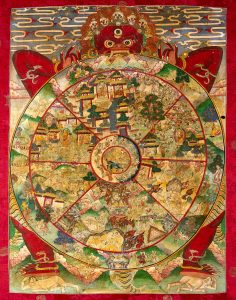 The picture above represents the yamA controlling the jIva chakrA as per the Tibetan tradition. The middle circle has a snake chasing a pig which in turns chases a rooster which in turn chases the snake. These represents the desire (snake), hatred (pig), and ignorance (rooster). These three are the primary cause of the jiva chakrA. The next layer has six divisions. The upper three divisions represent the relm of dEvAs, yakShAs, and manuShAs. The lower three divisions represent the relm of animals, asurAs and pishAcAs. The next layer depicts the various actions performed during the jIva cycles. yamA is depicted in the picture as controlling the entire chakra within him. This was included for the enjoyment of sAdhAkAs so that the perceptives of other philosophies and how closely they relate to our philosophy can be admired.

We have included the mantra japA and AvaraNa kramA of citragupta mUrtI as well. Citragupta pUjA is performed on the citrapourNami day.

According to the purANAs, when yamA told brahmA that he could not handle the workload of determining the karma phalAs of all beings, brahmA went into meditation and out of Him sprang a dEvatA. He had a pen and a notebook in his hands and was lotus eyed and a very pleasing personality.

Since he came from the body of brahmA, he was named kAyasthA.

BrahmA then ordained him to note down the actions of all jIvAs. Since no secrets escape from his eyes and everything gets imprinted in His books, he is called citraguptA.

YamA got his daughter irAvatI married to citraguptA and another surya vaMsi daughter called dakShiNA was also given to citraguptA. Through irAvati, he had 8 sons and through dakShiNA, he had 4 sons. Thus, the pictures of citraguptA would prominently have 2 women serving him and 12 sons surrounding him. It is through these 12 sons, citragupta gOtras got spread throughout the bhArata dEshA.

Citragupta pUjA is very important for these gOtrakArakAs and they perform it in grandeaur every year. The commonly used Arati and chAlisA of citraguptA is also included in this issue.

In addition to the purANAs, citraguptA is mentioned in the vEdAs as well. In fact, he is considered as the pratyadhidEvatA for kEtu graham.

We hope that this issue will be a good addition to your spiritual collection.