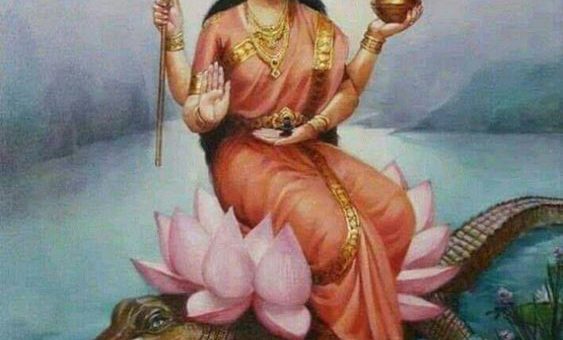 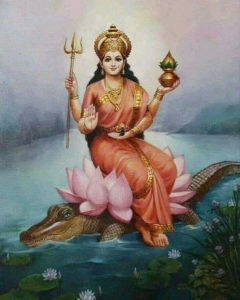 We have included the vidhAnaM for goddess Narmada in this issue. Narmada jayanti falls on the mAgha mAsa shukla pakSha saptamI. Several purAnAs glorify this Goddess to the extent that the Holy Ganga is considered a baby before the existence of narmadA. In skAnda purANa, sage mArkaNDeyA (a chiranjIvi) explains how he has seen narmadA continues through the praLaya when everything else perishes and merges.

Legends claims that when Shiva was meditating on the RukShavan parvat, due to the intensity of his tapasya, he started to perspirate and a sweat fell on the mountain and took a form a beautiful damsel with blue eyes and playful wits. She is hence considered as Shiva’s daughter.

She playfully removes all the sins of those who comes to have Her darshan and grants them boons. This playfully “narma” granter of wishes “dA” resulted in her name, NarmadA.

Shiva grants her the boon that She will continue to flow in the vindhyA mountains and the only river that is imperishable (chiranjIvi). All others – even the holy Ganga – is perished during the pralaya but narmadA is everlasting. This puranic claim is even supported by the geological findings that claim narmadA to be the oldest of all rivers. Shiva also grants the boon that any beings – a worm to the intelligent humans, if they take bath in the holy narmadA and dies on the northern bank of the river, they attain moksha.